The son of a watchmaker, holder of a degree in horology (1999), Sébastien Billières begins his career working directly under the master, Roger Dubuis, whose team then numbers just around ten.

In the beginnings of Urwerk, he is the first to join Felix Baumgartner on prototyping, testing and parts manufacturing as part of the Harry Winston Opus V project team. To this day, Sebastien remains in charge of aftersales for this model.

When destiny calls, there is no wrong number. Eager to learn and sharpen his skills, Sébastien sets up shop in the orbit of the greats of his time. The workbench he rents from Svend Andersen was previously held by none other than Felix Baumgartner, his friend and mentor, and before him by Franck Muller.

Ensues the production of tourbillons, a specialisation in automatons and the “Poinçon de Genève” – Sebastien’s quiver of skills grows and doesn’t go unnoticed. In 2006, IFAGE, the Foundation for Adult Education in Geneva, gives him carte blanche. He imagines and sets up two dedicated curricula: Modular Training in Watchmaking and Training in Industrial Quality. Sebastien is still part of the faculty there, and in charge of training programmes.

From 2007 onwards he develops ground-breaking mechanisms and complications for high watchmaking “Maisons”. As business grows, his advanced manufacturing operations specialise in the assembly of “Poinçon de Genève” calibres. His team expands to just over twenty and his company becomes the region’s leading contract manufacturer. It’s a success of the best kind.

What continues to drive the dream is the passion he lives and shows for his art, and the magic of serendipitous encounters along the way. After years of acquiring mastery in diverse fields, the powerful spark of linking this know-how: The timing is perfect as he joins forces with Catherine Henry to found GENUS in 2019. From the outset, the fledgling Geneva-based brand enjoys impeccable legitimacy, its destiny assured. A strong signal that the brand, and its 40-year-old master watchmaker, will be around for quite a while yet to ensure the promise of GENUS is kept. The solid ties of trust weaved by working with the best over the past twenty years, which still endure to this day, give GENUS a robust credibility in terms of operational and watchmaking excellence that is only reinforced by the Maestro’s experience as a restorer, designer, mentor and advisor.

This also enables the brand to make its mark in the rarefied sphere of high watchmaking from the start – with its own in-house manufactured movement in 18K solid gold.

Sébastien Billières successfully leverages the proven expertise acquired at the side of the greatest names in high watchmaking. He has always lived, breathed and dreamed horology. For him, a healthy sense of self and happiness at work come through being free. Confident and curious, he assumes his multiple roles, alternating between the different responsibilities of watchmaker, trainer, contractor, consultant, entrepreneur and now co-founder of the brand. 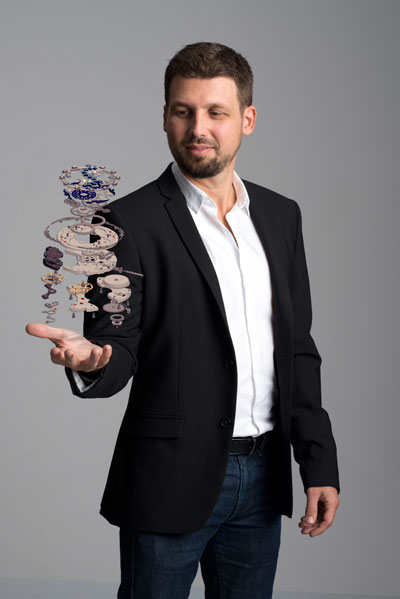 We use cookies to ensure that we give you the best experience on our website. If you continue to use this site we will assume that you accept it.OkPrivacy policy